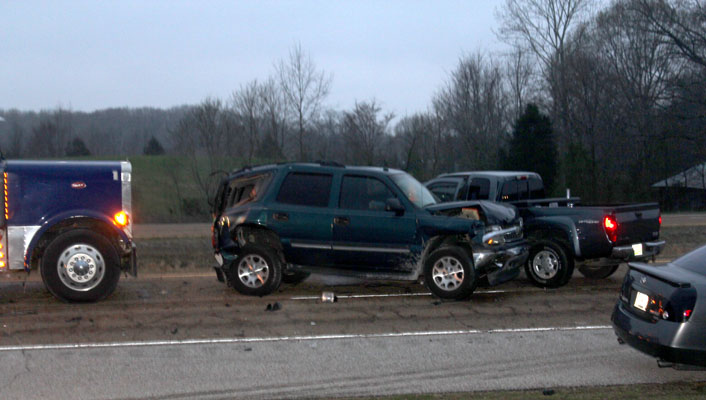 The first official day of Spring was ushered in by cool weather, slight rain, and accidents in two parts of the county. Sometime before 7:00 a.m., Tuesday, March 20th, traffic on the westbound side of Highway 412 West came to a standstill as the Tennessee Highway Patrol and two Henderson County deputies responded to a seven-vehicle accident just west of Gorski’s. The Henderson County Sheriff’s Department routed a steady stream of traffic onto Flanagan Acres Road to bypass the wreckage along both westbound lanes, and the medians. Although there were no serious injuries, three of the automobiles were wound tightly into one another, the side crushed on one, the front on the other, and the front and rear of the third. A tractor trailer truck and another automobile sat behind them. An AutoZone tractor trailer, sat just west of the collision area, with a pickup and an automobile mired into the wet earth of the bank on the north side of the road. The cause of the accident is still pending a report from THP, but one onlooker said that it may have been a lane change.
Around 8:20 a.m. the Henderson County Rescue Squad and Fire Department responded to a one vehicle accident on the 118-mile marker of Interstate 40. Chief Lynn Murphy said that a vehicle pulling a boat had lost control after leaving the roadway, and it was thought at first that the driver was pinned into the wreckage. Responders were able to pop open the door, and the driver emerged with only slight injuries.

For this and other interesting stories, see the March 21st edition of The Lexington Progress.