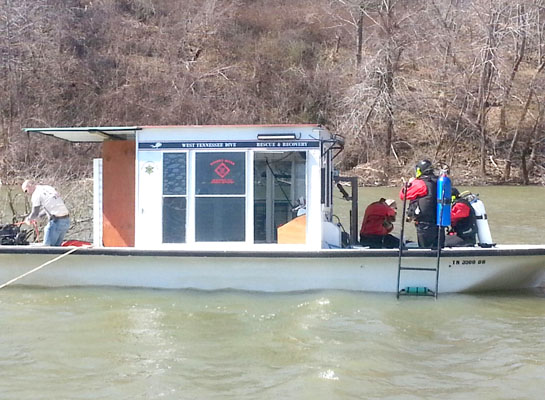 Captain J.D. Dunkle, of West Tennessee Dive Rescue and Recovery, said that the organization had been requested to join the Thursday, March 16th search at Mason’s Boat Dock, in Waverly, Tennessee, for a firefighter that has been missing for about ten days. Burt Staggs has been covering the story that started on Tuesday, March 6th when Nashville Firefighter Jesse Reed was reported missing after he reportedly plunged his vehicle into the flooded river on Tuesday morning.  “Humphrey County Sheriff’s Office said on Thursday, March 15th, that they are on Kentucky Lake searching for Jesse Reed, they say are using side scan sonar to locate Reed.” Dunkle said that three of the six members of West Tennessee Dive were in the water most of the day without turning up a sign of Reed.
“The incident occurred at approximately 1:30 a.m. on Tuesday morning near Point Bluff Lane, Waverly,” Staggs reported, where flooding in the area was several feet above flood stage.
“Many questions now surround the investigation. The female that was reportedly also in the truck has been identified as Reed’s wife. The HCSO says they have no evidence she was in the Jeep. They also say they have no evidence that Reed went into the water. On March 9th, it was reported that the Tennessee Bureau of Investigation joined in and “Friday night served two search warrants in connection with this case. One warrant was served at the residence of Jesse Reed in Pegram, Tn. The other was served at a home near where Reed reportedly drove into the river.”
“Early on, according to Humphreys County Chief Deputy Rob Edwards, it was believed that the man was in the vehicle because it would be hard for a person to get out of the vehicle and the water.”
Although efforts are being made to find Reed in other locations, “It’s still important to make sure that he is not at the site where the vehicle entered the water,” Captain Dunkle said.

For this and other interesting stories, see the March 21st edition of The Lexington Progress.