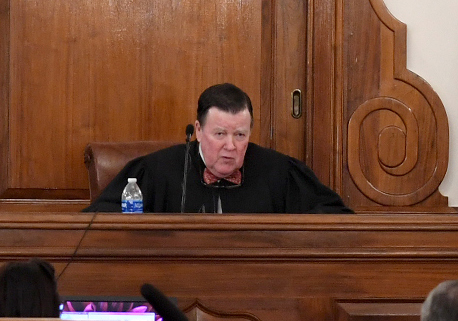 After beginning plea negotiations on Thursday, Dylan Adams returned to the Circuit Court of Judge C. Creed McGinley in Savannah, Tennessee on the kinapping, rape, and murder charges of Holly Bobo in 2011.

Attorneys for both the defense and the prosecution took the opportunity before the court was called into session for additional discussion.  Dylan Adams entered the room at 10:04 a.m., the attendance is light with only the first four or five pews being filled.

In a few words, Judge McGinley encapsulated there had been no progress in the plea negotiations.  “I met a few moments ago with the attorneys to check on the progress, and none has occurred since Friday.”  Later he said that, “I don’t mind kicking the can down the road,” but he also indicated that making a plea would have much greater barriers later on.

“I am going to recess until 11:00 a.m. to see if a negotiated plea can be reached.  I’m not asking people to sacrifice their personal beliefs, but this is long past the time that the case should have been resolved.”

Watch this site for updates later today from The Lexington Progress.