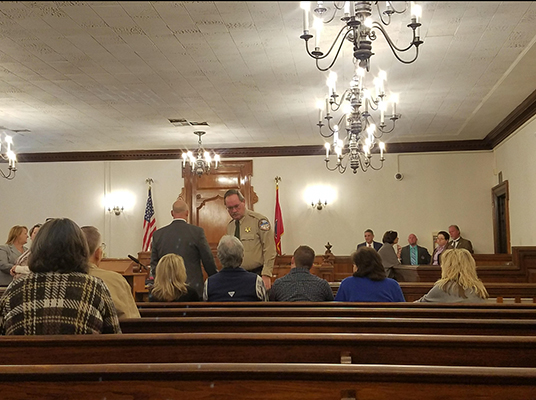 Decatur County Sheriff Keith Byrd shares a moment with the Bobo family before the start of the proceedings.
Photo By: Burton Scott Staggs

At 2:00 p.m., the court was beginning to fill but still not back in session, the family already in place well before the call to order. The Reverend Don Franks, from Corinth Baptist Church, in Henderson County, sat two pews behind the Bobo family; he has been a constant and consistent figure of support for the family and the community. Security is still being provided by Decatur County, with Sheriff Keith Byrd and one of his deputies.

Dylan Adams re-entered the courtroom at 2:06 p.m., his hair trimmed closely, posture slouched, he wrings his hands in front of him in a seemingly nervous gesture. One of his attorneys bends down to speak to him briefly as the Bailiff calls “All rise.”

Judge McGinley said that there has been substantial progress, but no resolution today, and the case is being reset for Monday, December 18th, at 10:00 a.m. “If this case can be resolved, in fairness to everybody, there is no reason to keep making trial preparations.” He is moving the case to Monday, “But I hate to keep moving the nightmare further down the road,” he said. He has already been in contact with authorities in Chattanooga about a possible jury pool from that area. The court adjourns briefly afterwards, at 2:11 p.m. As people leave the courtroom, the Bobo family stays behind and speaks briefly to District Attorney General Jennifer Nichols.

The courthouse in Savannah was lightly attended as Dylan Adams moved across to be seated with the defense team on the left side of the room. Judge C. Creed McGinley looked with level, deadpan eyes, as he began to address the defendant, the prosecution, media, and audience. It is 10:00 a.m., Thursday, December 14th.

“Everyone has heard of the Doomsday Clock,” McGinley said, in reference to end times and the environment,” and some say it is at 11:59; I am here to tell you that for this case, it is at 11:59.” There was silence in the room.

“At this point,both sides know what they need to do,” he said, and adding that, “I want both sides to enter into fruitful negotiations. This has gone on long enough…and I think the general public has a right for this case to be disposed of.”

Both the death penalty and life without parole have previously been removed as options in order to pave the way for such a day.  It is time to settle, time for it to be over, time for closure. Many think so. The state has already announce that remains of the tragic young victim would not be available for burial until there is no longer a need for the evidence.

Mrs. Bobo is one of the last to leave, speaking to some of the family and friends as the courtroom emptied, a small knot of supporters gathered around her and her husband. Mr. Bobo was dressed in jeans, with an open sleeve sweater over a blue plaid shirt. He is quiet, pensive, and he looks on as Karen answers a final comment, and then they move from the room.

For this and other interesting stories, see the December 20th edition of The Lexington Progress.

Watch for updates on Monday, December 18th as the court re-convenes.