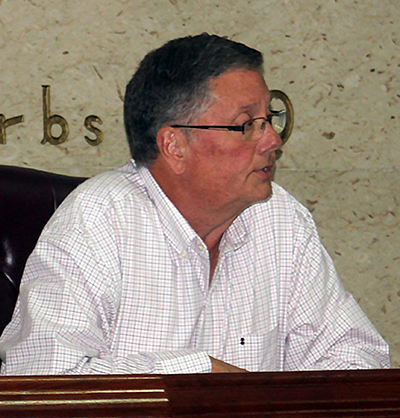 County Mayor, Dan Hughes, announces his bid for the 72nd District seat to members and audience at the county commission meeting on Tuesday, October 10th.
Photo by W. Clay Crook / The Lexington Progress.

The chatter had begun to settle before the beginning of the Henderson County Commission meeting, Tuesday, October 10th, when Mayor Dan Hughes asked for a moment of time before the session.  Gazing at the men and women that he has worked closely with over his two terms as county mayor, Hughes, in his calm, even mode of address, quietly announced that he would be seeking the office of the 72nd District, which represents Henderson County.  Earlier in the month, Representative Steven K. McDaniel announced that he would not seek another term in 2018, which will complete thirty years in public service.  Hughes is, perhaps, the first hat in the ring for the office next Fall.

Hughes announced late last year that he would not seek a third term as county mayor.  His tenure has been earmarked with grants funding county improvement and balanced budgets, and his candidacy for the District 72 seat sets aside inquiries about another run as mayor.  Hughes was well known for many years as a sports announcer for WZLT-99, Lexington, and has pastored…