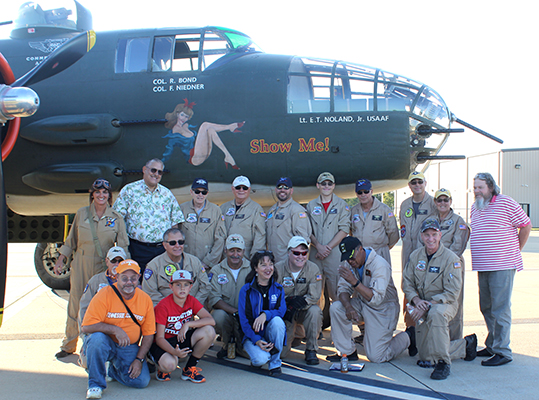 The crew and passengers of the B-25 J Mitchell “Show Me” of the Missouri Commemorative Air Force.
Photo by Kellye Blue Franklin / The Lexington Progress

The flag of the United States snapped briskly towards the southwest at the Beech River Regional Airport, as a yellow WWII T-6 Texan banked in the sun, and made its approach to the landing field.  It was followed shortly by an olive drab L-3 and then a blue TBM Avenger.  As the Avenger made its way to the tower area, the wings began to fold up, a maneuver which enabled more of its kind to be loaded side by side into aircraft carriers.

The queen of the event was the B-25J Mitchell, called the “Show Me,” built in December 1944 in Kansas City, Missouri.  Below the cockpit was the painting of a classic bomber femme-fatale.   Shading his eyes with his hand from the still bright 4:00 o’clock sun, Knox Franklin peered into the azure blue sky, trying to anticipate the direction of the incoming craft.  He inspected each one with a gaze that captured every line, every feature, as if wondering how the plane would respond to his not quite twelve-year-old hands.  He is tall for his size, lean, fit, almost a model of the men who flew and fought in these craft over seventy years ago.  Entering the belly of the B-25 was tight and cumbersome for the rest of the passengers, but Knox climbed in with an agility and finesse, as if born to take command of the pilots’ cabin.  The seats, controls, gun grips…they fit him like a glove.  “The men who manned these craft were often just boys themselves,” one pilot said, “in their teens and early twenties, their first time from home and ready for the world’s hardest war.”   The confines are cramped, diminutive, there is no access from the rear of the…