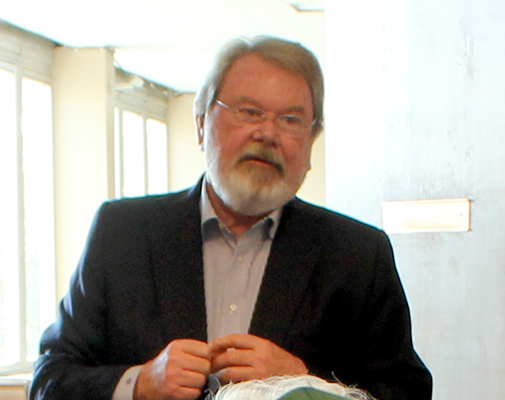 Deputy Speaker of the House, Steven McDaniel, addresses his constituents in Lexington, ending his forum with the announcement that he would not seek another term.
Photo by W. Clay Crook / The Lexington Progress

Release-  House Deputy Speaker Steve McDaniel (R-Parkers Crossroads) announced today that he will not be a candidate for reelection in 2018. McDaniel made the announcement during his annual community meetings tour in Henderson, Chester, Decatur, and Perry counties.   “It is with mixed emotions that I announce I will not seek re-election to the House of Representatives,” said Representative McDaniel. “My service to the people of District 72 has been one of the greatest honors of my life. I am incredibly thankful for the continued support, friendship, and kindness of my constituents who have entrusted me to represent them for the past 29 years.”   “I love what I’ve been doing, especially helping my communities with the support they need to thrive and assisting individuals to access vital state services,” added McDaniel.   “I will miss that greatly.  I will also miss the people I work with but look forward to having more time to spend with family.” He and his wife Phyllis are looking forward to welcoming their first grandchild, who is expected to arrive in October.

McDaniel has served in several top leadership positions, including Republican Leader from 1996 to 2002 and House Republican Caucus Chairman from 1992 to 1996. In addition, he served as National Chair of the American Legislative Exchange Council in 2001.  He was appointed Deputy Speaker by House Speaker Beth Harwell in 2009. He currently serves in key leadership roles as Chairman of the House Ethics Committee, Chairman of the House Rules Committee and as a long-standing member of the powerful House Finance, Ways and Means Committee.

Representative McDaniel has been a strong advocate for rural Tennesseans. He sponsored several key laws during his tenure, including the Consumer Health Care Advocacy Act and the Competitive Cable Act. The Consumer Health Care Advocacy Act provided consumers with more options in their managed care plans. The Act was particularly important to consumers in rural areas by specifying that primary care physicians and specialists be within specific reasonable travel time.  The Competitive Cable Act charted a positive course for the future of cable, video and broadband communications services in Tennessee.  The expansion of high speed broadband to unserved and underserved communities was one of the key provisions in the legislation to foster access to rural areas of the state.     He also sponsored the Heritage Protection Act which defines a historic entity, event, figure or organization and provides legal process for a petition for waiver to be brought by a local government to the Tennessee Historic Commission. That act requires notice to be given to the public for comment, with the right to appeal the commission’s decision to Chancery Court.   During his tenure in the House of Representatives, McDaniel has also represented Wayne, Madison, and Hardeman Counties.