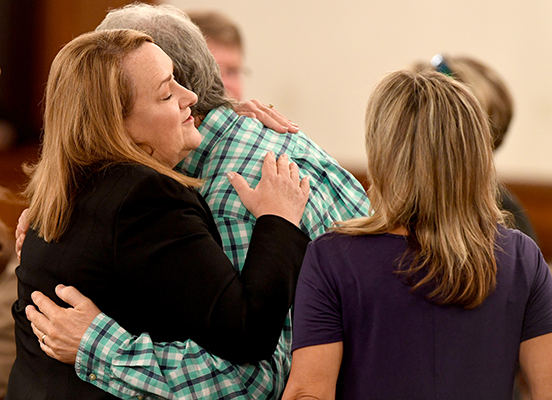 The dark oak paneled walls of the Hardin County courtroom have heard sixty years of stories, but none perhaps like they have heard these past two weeks.  The tension is thick as the jury returns for a verdict in the trial of Zachary Adams.  The family of the victim, Holly Bobo, sits on the same side as the jury, a few benches and the ancient bar of justice stand between.  The courtroom echoes from the footsteps of the jurors, and the creak of the benches as they move in and make their seats. There is silence everywhere else, even the beating of hearts has seemed to stop.  The verdict is in.

The Honorable C. Creed McGinley has presided over this case for eleven days.  His role has been the mediator between the government and the defense, the instructor for the jury, and sometimes a referee.  Today, he is the black robed harbinger who invokes the voice justice from the foreman of the jury.   The jury began deliberation on Thursday afternoon, and tensions mounted as Friday began to pass.  Two instances on Friday afternoon the jury sent questions to the judge.  Around 4:30 p.m. it was finally announced that a verdict would be issued at 4:45 p.m.

“Out of respect for the jury, I want you to contain your emotions, I want you to contain your displays.  If there is an outburst, I will have the deputies to take you into custody…this isn’t a time to cheer like at a football game, likewise, you shouldn’t show visible displays of disappointment.”  The judge looked towards the box and said, “Has the jury reached a verdict in this case?” The foreman answered, “Yes, your honor,” “Then pass the jury forms to the bailiff,” and the judge proceeded to read the verdict.

Count 5:  Aggravated Rape with Use of Coercion- Guilty

Count 7:  Aggravated Rape with Force while Aided or Abetted by Others- Guilty.

“There will be a separate sentencing hearing on Count 8, but it is too late in the day to hear that,” Judge McGinley said.  The court will meet Saturday for the sentencing hearing, and take a poll to see if the jury wants to continue on Sunday afternoon if needed.

For the complete story, see the September 27th edition of The Lexington Progress.