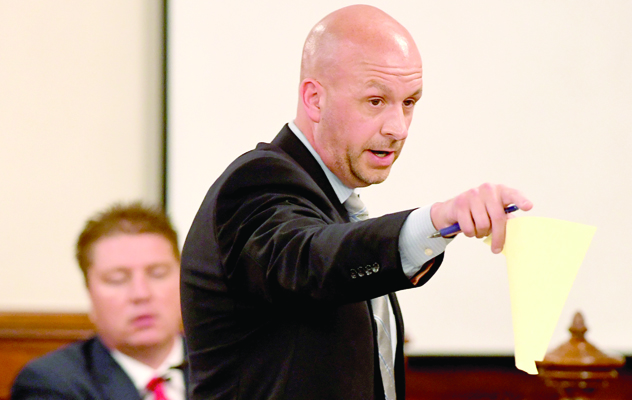 Justice is like a mighty river, but it can slip the traveler to an unwanted shore, or an encircling morass, where mystery seems to deepen, and darkness overshadows the light.  Every answer, from this point forward, begets a thousand questions.

Tuesday, September 12th, is technical, testimony from Lawrence James concerning blood in the carport at the Bobo home, THP Warren Rainey on searching the area around the home of Zachary Adams.  Then Rebecca Earp was called to the stand…she is the former girlfriend of Adams during the disappearance of Holly Bobo.  She testifies about Zach Adams having a large Tupperware tub that conversation hinted was the body of Holly Bobo.  When the couple separated in May 2011, there was an altercation, with testimony that Adams tied her feet with a belt, and threatening to do to her what he had done to Holly.  The defense attempted to compromise her testimony as under duress from the state, as it was claimed that Valerie Trout, with TBI, had threatened to take Earp’s unborn child if she didn’t tell the truth.

Day three of the Zachary Adams trial carried the family, the court, and viewers into a creek near Gooch and Horny Head Creek Road where Holly’s lunchbox was found, and a gully on County Corner road, where the personal effects, and several remains of Holly Bobo were found.  The skull was found by Larry Stone, who had been hunting for ginseng.   The area is in a secluded area north of I-40, between two distant sawmills.  Wednesday was day three of the ordeal.  The prosecution continued to build its case, with testimony on what appeared to be an entry wound in the back of the skull from a bullet, one no larger than a .32 caliber.   This is a link to the gun found on Memorial Day, and the subject of previous motions just a month or so ago.

The Bobo family stoically endures the testimony, but they do not seem as tired.  Perhaps the burden they have carried is lightened by the testimony as if, layer by layer, it is transferred from their shoulders onto the altar of justice.

Thursday, day four, was the seven-hour testimony of Jason Autry, that begin to fill in the pieces of the puzzle comprising the day of April 13th, 2011.  Autry’s testimony, sounds somewhat rehearsed, the vocabulary stilted and formal, but it is consistent with the evidence, and he does not deviate from it on cross examination.  He paints a dark portrait of the events, going to the home of Shayne Austin to get a pill to make a “hot shot of dope.” Zachary and Dylan Adams, according to his testimony is there, and Zachary asks him to help bury the body of Holly Bobo.  The body is wrapped in a quilt, laid horizontally against back of a white Nissan pickup.  He and      Zachary Adams drive off, and Autry mentions that there is no shovel or pick axe.  They end up under the I-40 bridge across the Tennessee River, and unload the quilt shrouded body against some rip-rap at the bottom of the embankment.  Autry said he heard a sound from the quilt and tells Adams that she has heard Autry’s name and heard them talk.  Autry said that he walked down the road a bit to make sure no one was watching and hears a single shot that goes “boom-boom-boom” as it echoes under the bridge and down the river bottom.  It is deathly quiet, only broken by a flock of martins as they break from cover into the air.    Autry then said that he heard a boat engine, and he and Adams reload the quilted body back into …

For the complete story, see the September 20th edition of The Lexington Progress.