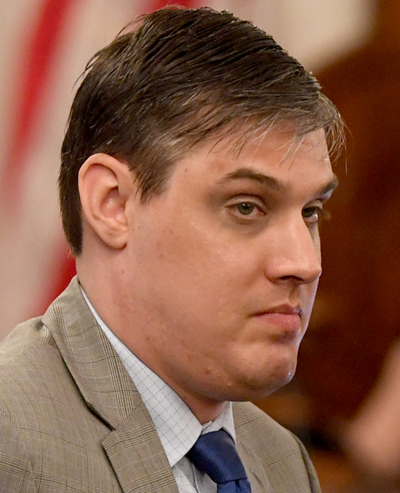 ** Continued from “Holly Bobo: The Trial Day One – Beginning of the Journey’s End” **

Likewise, Judge C. Creed McGinley extended every courtesy to the needs and comfort of the jury and witnesses. The court came back to order at 1:00 p.m., and Jennifer Nichols with the prosecution began with her next witness, James Barnes, a neighbor of the Bobo family.

“About 7:50 a.m., I heard some arguing next door, a little later I heard a scream and then it stopped…she cut out mid-scream and my dogs were raising cain, so I walked over to the tree line.” He and his family, on the way to work, pulled just briefly into the driveway of the Bobo house, turned off the truck, but didn’t hear anything else. After getting to work, he called his mother to call Karen Bobo to see if everything was okay. The TBI later called him to return home to answer questions, around 11:50 a.m.

The defense team watched closely as a photograph of the area, that showed the Barnes house, was placed on the screen after being entered into evidence. The witness was turned over to cross examination by Thompson. Thompson had him clarify that his ex-wife had heard nothing, that Barnes did not hear anyone call for help, and that there was no traffic on the road. However, he did say that he heard someone say “Stop, stop!” and that he did recognize the girl’s voice as Holly’s. Thompson’s cross attempted to show that there were some items that Barnes did not remember now that were in his statements six years ago.

Karen Bobo was then called as the next witness. Judge McGinley called for a sidebar at the bench, the courtroom hushed as the discussion took place in tones too quiet to discern.

Karen Bobo testified that Holly had graduated from high school but stayed at home after she started at UT Martin-Parsons Campus, and went to class four days a week, and off on Fridays. Ms. Bobo taught 2nd Grade, she said, at Scotts Hill Elementary. Nichols asked her to identify the photo of the family member that was earlier on the screen. Karen answered with a broken voice, full of emotion, “That was my…

For this and other interesting stories, see the September 13th edition of The Lexington Progress.