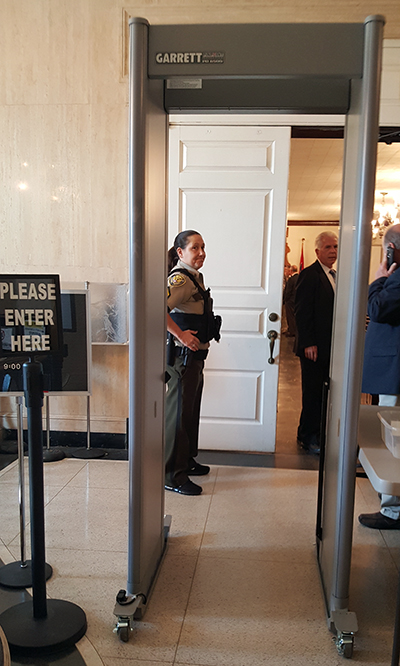 Security was strict, tight, and very professional during the impaneling of the jury for the Zachary Adams trial. The Hardin County Sheriff’s Department and court staff double check the courtroom after it empties for lunch.
Photo by W. Clay Crook / The Lexington Progress.

The solemnity of the high court in Hardin County was broken by the pre-jury selection chatter.  Some recognized neighbors, others were made comrades by the shared nervousness of being a part of the first trial in the Holly Bobo case.  The trial for defendant Zachary Adams has been, in many respects, in the making for six years.  Holly disappeared in April 2011, remains were found in 2014, and arrests began to materialize shortly thereafter.  It’s 8:30 a.m. on  Saturday, September 9th, and the impaneling process for the jury is about to begin.

The courtroom hushed as Diane Polk, clerk of the court, brought the room to order.  Mr. Gilkey, the bailiff, opened the session with all the majesty and aire due an institution pressing close to its two hundredth year in Hardin County.  Judge McGinley gave him a slight bow and remarked to the court that “Mr. Gilkey opens a courtroom better than perhaps anyone in the whole United States.” Four missed roll call, two arrived late, one other arrived by mistake, he had been previously excluded, and exited the room with a smile amid the cheers of the other prospective jurors. Judge McGinley said that he had entered a new era in his life, 30 years on bench and this is his first time to be here on a Saturday.  One employer, he said, thought it was a hoax and called to ask.  It is a courtesy  for the jurors, the judge explained, to limit the amount of time they will have to be sequestered from home.

The first panel of 15 included one African-American male, running close to the ethnic makeup of the county. One juror began to suffer from a panic attack.  The judge asked him if this was something that comes and goes.. the juror answered no and the judge excused him, remarking that the process would only get worse.This is going to be rigorous” Judge McGinley advised. “We are going to be going five and a half days a week…we are going to keep things moving.”  Another prospect was excused for health reasons, while another had moved away and was taken off the list.

Jennifer Nichols introduced her team to the jurors, but prospective jurors in the back had some difficulty hearing.  Nichols then began to project her voice in a clear and distinctive manner. The Bobo family sat near the right front, flanked by law enforcement, with the calm and comforting of their pastor, Rev. Don Franks of Corinth Baptist Church.  Nichols did not spare the prospective jurors the gruesome reality of the case. “In the course of kidnapping and raping, Holly was killed.” “You have to judge the credibility of the witnesses she reminded them, “Are you up to it?” she asked.  A staccato of voices answered yes while others solemnly nodded their heads.”It won’t  be a quick case,” Nichols continued. She spoke of the great number of witnesses to testify, “You’ll have to soldier through it.”

On the opposite side of the room, Zachary Adams and a half dozen of the defense team observed the  voir dire, their expressions, perhaps noting the ones who were bold enough to answer, gauging and weighing the quality of the answer, mentally reviewing a checklist built by their years of experience…designating a place on a list essential to this phase of the trial…keep, exclude, or undecided.  Also in the mind of both the prosecution and the defense is who will emerge as the natural leader, the foreman of the jury, whose personality and presence may sway those on the edge, who may unite a jury or divide it irrevocably to mistrial. Bill Simmons, a defense attorney from Nashville, is a slightly framed, immaculately dressed, glasses sometimes on, sometimes off, flipped through a document, perhaps the questionnaire answered by the juror who currently is speaking, sits calculating, making a note, and then studying the document again.

Zachary Adams is clean shaven, sitting slightly askance in his chair, head cocked and turned to the right, listening to  Nichols as she goes over the three options if found guilty of first degree murder.  There is  no obvious expression on his face, but his jaws moved, sometimes rhythmically, as if chewing a small piece of gum.  He is in a light gray coat and a white shirt open at the throat with no tie, his hair looks freshly groomed.

Karen Bobo and her husband stood during the recess, their backs against a pew, speaking quietly with those who walked over to see them.  Peach slacks, a teal top with a black flowered sweater accented with both colors, but her eyes are weary.  She graciously smiles at a remark, but her face is full of the burden she and her family have carried for six years.

Jennifer Thompson introduced the defense team, Bill Simmons, two investigators, attorney David Hopkins,  and Thompson’s husband who is a civil attorney in Nashville, but very knowledgeable of juries.  Thompson’s tone was companionable and open, more like a Kindergarten teacher than crack defense attorney.   Her tone and cadence begin to make the leap that is needed to establish a repertoire  that will equate her voice with credibility, her gestures with fairness, her eyes with fact.  “What do you imagine an innocent person would feel like who was charged with murder?” she posed to the fifteen people in the jury box, paving the way for the defense.

There is one pew for media.  There are TV journalists from New York among the local and regional reporters.  The pew is crowded.  Thompson mentions the media, and a prospective juror sounds concerned.  Judge McGinley reassures her that the rules will be enforced to protect the identity of the jurors.  One video camera will broadcast Monday, but the angle of coverage must exclude the jury box. At 12:19 p.m. the defense finished speaking to the first fifteen prospects, nearly four hours from the beginning of the day.  One attorney from each side was called to the bench.  Judge McGinley called the name of three prospective jurors to be excused and the jurors were rearranged.  Then, looking up from his seat, the judge announces four more were dismissed. Eight of the original fifteen  were left in the box by lunch time.

The trial is Monday.  Everyone is ready…and no one is ready.  There can be no real end until the heartbreaking details are re-lived, not in the privacy of home, but in a crowded room, with the world watching through social media and the airwaves.