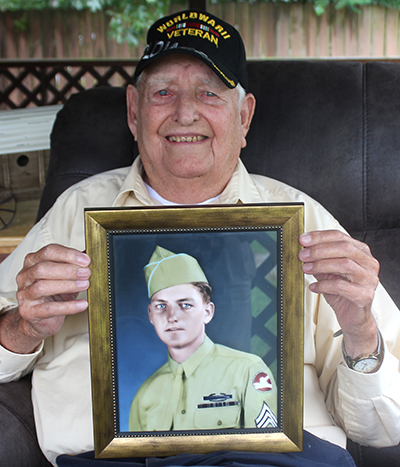 WWII veteran, Paul Roberts, holds his portrait from the war, he said, “that had to be won”
Photo by W. Clay Crook / the Lexington Progress

Enjoying the afternoon breeze on his sun porch, it’s difficult to imagine the winter of 1944. The weather was below freezing, snow covered the Belgian countryside, and the German war machine began its last great offensive that has come down through the ages as the Battle of the Bulge. Paul Roberts turned 95 on the 22nd of August. Seventy-five years ago he was donning the uniform of the United States Army and headed to Fort Ogelthorpe, Georgia, and later Gainesville, Texas, where he was assigned to the 84th Infantry.

“I had started college at UT- Martin,” Roberts said, “but I’d really never been out of Henderson County before, never had been to Jackson.”  He was born on…

For the complete story, see the August 30th edition of The Lexington Progress.