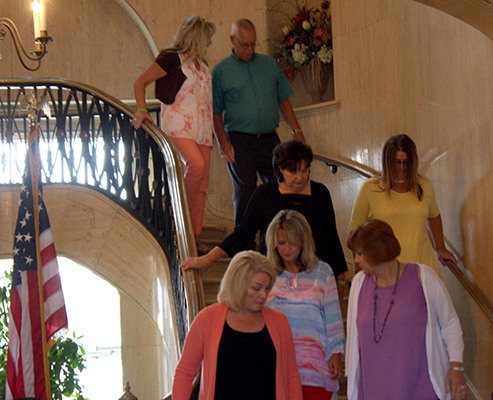 The Bobo family quietly exits the Hardin County Courthouse after the end of the motions hearing.
Photo by W. Clay Crook / The Lexington Progress

Jennifer Thompson, the attorney leading the defense for Zachary Adams in the Holly Bobo case, ran through several pages of evidence believed to be missing, delayed, redacted, or of low quality, in support of a motion for a further continuance of the trial set for September 11th.  Jennifer Nichols, who leads the prosecution by the state, countered that much of the evidence had already been provided to the defense on a hard drive, and locations on the hard drive provided. In short, Judge C. Creed McGinley ruled against the continuance. “The state has complied or exceeded the evidentiary requirements of Rule 16.” The state said that they had received very little in the way of reciprocal discovery, and the Judge also ordered that the defense to provide reciprocal evidence within two weeks.

At one point McGinley asked the defense what date would satisfy them for a trial.  Nichols replied that January might be suitable. Judge McGinley replied that the answer would be closer to “when pigs fly,” as no date has been or probably would ever satisfy the defense.

Some evidentiary items were worthy of note.  The defense said that the photograph provided to them of two Dell shoe prints were of very low quality, and requested the gel prints, where paper with a sticky surface is used to capture the pattern of an original print. The state said that they had made this available and that it was still available. Judge McGinley repeatedly said that, “I intend to keep a level playing field for both sides.”

McGinley was also clear that he would not allow any evidence to be presented simply for “shock value.” “There is probably nothing from the skeletal remains that would be probative,” McGinley said, “with exception of the skull.”  The state replied that they were not

Neither the defense team or the Bobo family was available for interview afterwards.  Attorney General Nichols was asked by The Lexington Progress about any updates to the defense motion to change venue.  Nichols replied that…

For this and other interesting stories, see the August 16th edition of The Lexington Progress.