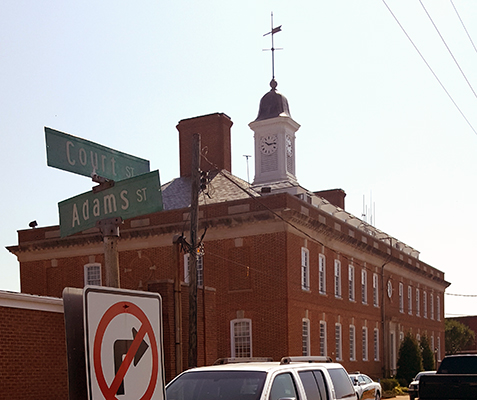 Jury selection continues in the pre-trial process for defendant Zachary Adams in the Holly Bobo trial. The Hardin county courthouse sits, ironically, at the corner of Court and Adams Streets.
Photo by W. Clay Crook / The Lexington Progress.

“The case is State of Tennessee vs. Zachary Adams, #17C210, but it is more commonly known with the name of the victim as the Holly Bobo Trial,” Circuit Court Judge C. Creed McGinley said to prospective jurors.     About seventy-five out of about one hundred prospective jurors slowly made their way into the Hardin County courthouse to fill out questionnaires.  “You’re here because I was beginning to sweat,” McGinley joked. “I was down to a jury pool of sixty-seven, and I feel that we need at least fifty-one by trial.”    Twenty-five or so were granted hardship discharges during the next hour.  Another half dozen of the “no-shows” had been contacted by that time and their hardship determined.  “One was my son,” McGinley winked at the defense, “I thought perhaps you’d like to have him excused.”  McGinley has striven all along to avoid any appearance of impropriety.

Prospective jurors were reminded to avoid media information about the case, which continues to draw attention nationwide. Judge McGinley remarked that his son was across the country getting an autograph for him from Pete Rose, and the case was brought up.    What wasn’t discussed was the motion to change the venue or the jury from Hardin County.  McGinley is still moving forward with plans for the final jury selection of fifteen to take place on September 9th and the trial to begin on September 11th.

For this and other stories, see the July 26th edition of The Lexington Progress.