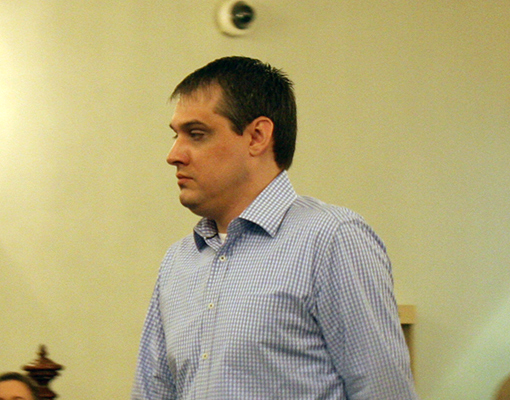 Zachary Adams made an appearance at the Hardin County Courthouse for a hearing on pre-trial motions.
Photo by W. Clay Crook / The Lexington Progress.

Both Zachary and Dylan Adams, two of the defendants in the 2011 Holly Bobo kidnapping and murder, were present at the Hardin County Courthouse before Judge Creed McGinley.   Zachary Adams and his defense staff took the far side of the courtroom, while Dylan Adams and his team occupied the jury box.   Halfway down the courtroom, the Bobo family, along with Rev. Don Franks of Corinth Baptist Church, were seated together.  Sheriff Keith Byrd of Decatur County and Deputy Anthony were present.  “We have been assigned as security for the Bobo family for the duration of the trial,” Byrd said.

Judge McGinley reviewed several motions to quash evidence from the Dylan Adams team, particular items from Weakley County involving conversations, calls, transportation, visitation, or gang affiliation.  Much of this, the defense said, is either not relevant or covered under attorney-client privilege.   The defense from Zachary Adams rose in counter argument that they would not be able to determine that unless they had access to the information.  Judge McGinley corrected the team for Dylan Adams when they stated that “It’s not anticipated that Dylan will be a witness at the trial.”   Judge McGinley answered that it was too early to tell if Dylan Adams would be a witness. “The defense has broadly hinted,” McGinley said, “that he (Dylan Adams) will claim the 5th Amendment.”

Jennifer Thompson stood briefly on the behalf of Zachary Adams after his brother’s attorney was finished and Judge McGinley gave his patented smile, cautioning, “Don’t snatch defeat from the jaws of victory,” reversing the quip.  McGinley said that he had, at first, been in favor, of the motion to quash, but the brief delivered by the Zachary Adams team was compelling to allow access to determine what materials would be relevant or fall under attorney-client privilege.

Dylan Adams was allowed to leave the courtroom and the judge proceeded with the motions by the Zachary Adams defense.  On a motion under criminal procedure, rule 609, on taking consideration evidence of previous convictions of a crime, McGinley said that it would be premature to rule on those at this time, that “I might see that felonies that fell within the ten-year age might be admissible with proper instruction.”

It was also too premature, the judge said, to waive what might be admissible under a 404B and 12D motion, “We’ll reserve that for trial,” he said, qualifying or at least make those open for discussion as soon as appropriate.   Judge McGinley did anticipate that two forensic authorities would qualify as expert witnesses, but he did not see at this time where opinions on evidence would be appropriate by the five people who had been granted immunity by the State to testify.  He also ensured the defense team that the State would provide copies of the information requested.

Concerning the use of television for the trial, the judge said that he had been very pleased by the conduct of the press, and that provisions would be made for a common feed.  “I will insist on dead mics during recesses or bench conferences,” and also admonished both the state and the defense to use bench conferences only when critical and as needed.  “I don’t want to have to subject the jury to being marched in and out of the courtroom multiple times,” he said.

Thompson then presented oral arguments for a continuance of the trial due to the State’s presentation of a gun around Memorial Day.  Thompson said that they had only received three photos of the gun, with no information on the maker, caliber, or serial number, and although they had the name of three possible experts, that time was needed for them to examine the evidence.   The court ruled that notice had been given on the firearm, and Attorney General Jennifer Nichols said no requests had been made by the defense to view the gun, but that it was available.

The judge ruled that there would be no cameras allowed on July 6th, when final issues and jury selection would take place.  He did mention that one juror had been relieved, as she had moved out of state, and that another was likely due to employee hardship.   The trial will begin at 9:00 a.m.  on July 10th, and the court anticipates a five-and-a-half-day schedule, running from 9:00 a.m. to possibly 5:30 p.m. each day, and until noon on Saturday.  Judge McGinley stated that being sequestered will be grueling enough on the jury members and he wanted to be able to make as many allowances on the time frame as possible on their behalf.

The court was adjourned and the Zachary Adams defense team used some time with court staff in re-arranging the defense table.  They anticipate the use of several laptops during the trial and perhaps one computer, and want to limit the visibility of the screen.

For this and other interesting stories, see the June 28th edition of The Lexington Progress.