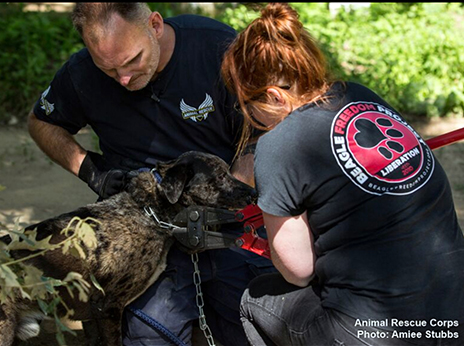 Staff at Animal Rescue Corps coordinate to release one of the animals at Reagan.
Photo provided by ARC.

News Release:  On May 25th,  Animal Rescue Corps responded to an urgent call from Henderson County officials for assistance with 48 dogs of various breeds and 15 cats found living in deplorable conditions on a property in Reagan, Tenn. All of the animals were seized by the Henderson County Sheriff’s Department, and the person responsible was arrested on charges of animal cruelty. This is the second rescue in two days for ARC and the Henderson County Sheriff’s Department. Yesterday the two agencies worked together to rescue 35 animals seized from neglectful conditions on a property in Luray, TN.

For further details, see the May 31st edition of The Lexington Progress.